Almost every scientist that studies the global climate (or climates) is certain that we are heading to disaster. Too many people are calling this little blue dot in the universe their home. They are producing ever more greenhouse gases, such as carbon dioxide (CO2), methane (CH4) and nitrous oxide (N2O). Together these gases have a range of ongoing and future impacts, including sea level rise, increased frequencies and severities of some extreme weather events, loss of biodiversity, and regional changes in agricultural productivity. 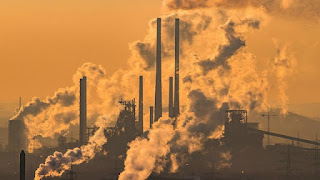 But there's a strand of science that looks at sunspots. Sunspots are relatively 'cool' regions on the Sun that appear darker when photographed. They are cooler than the rest of the Sun, although they are still around 4200ºC. They are caused by a cyclical concentration of intense, magnetic fields from the Sun. This inhibits and redirects the flow of hot matter to that region and makes it darker: a sunspot.

Now, scientists have mapped the movement of solar fluid that moves in roughly 11-year cycles, which correspond to weather cycles on Earth. Around the year 2022 (labeled Cycle 25), a pair of waves will be moving to the Northern and Southern Hemispheres of the Sun, getting slowly out of sync and reducing solar activity – and thus potentially cooling our climate[1].

Already, sunspots have been absent for most of 2018, and the sun’s ultraviolet output has sharply dropped. New research shows that Earth’s upper atmosphere is already responding.

During the period between 1300 and 1850 the Sun produced barely any sunspots and the Earth experienced a Little Ice Age. At its heart was the Maunder minimum, a 70-year period between 1645 and 1715. The Little Ice Age brought colder winters to parts of Europe and North America. Canals and rivers in Great Britain and the Netherlands were frequently frozen deeply enough to support ice skating and winter festivals. The first River Thames frost fair was in 1608 and the last in 1814. Freezing of the southern section of the Bosporus took place in 1622. In 1658, a Swedish army marched across the Storebælt ('Great Belt') to attack Copenhagen. The winter of 1794–1795 was particularly harsh: the French invasion army was able to march on the frozen rivers of the Netherlands, and the Dutch fleet was trapped in the ice in the harbour of Den Helder.

So, what will it be: bathing suits and cool wine or skating and hot chocolate?

Questions, reactions or suggestions? Want to advertise? Don't hesitate and mail me here.